A unique contribution of Ancient India to the world.

In Ancient India, mathematics was only used in an applied role, and studied for its own stake - primarily to formulate mathematical methods to solve architectural problems or to supplement studies of other branches of science. However, the intensity and depth with which these mathematical studies have been conducted, has amazed and stunned the world of mathematics ever since it has been discovered. Vedic Mathematics, as it is commonly known, was used to understand astronomical phenomena (as in determining timings of festivals and rituals), solve architectural problems (as in the constructions of Harappa), for astrology (as in the works of Jain mathematicians), for medicinal compositions (as in Ayurveda), and even in construction of Vedic altars (as in Shulbasūtra of Baudhāyana).

Vedic Mathematics, or simply Vedic Maths, finds its applications not only in arithmatic, but also in algebra, geometry, trigonometry, calculus and applied mathematics. Contrary to common belief, Vedic Mathematics is not an alternate numeral system, or even methodology. It is a set of mathematical rules formulated to supplement the usual methods of calculations. Vedic Mathematical Sūtras provide simple, straight-forward alternates to calculate, the otherwise cumbersome and complicated calculations:
Simplify Mathematical Computations and Calculations with these Sūtras, and Explanations » 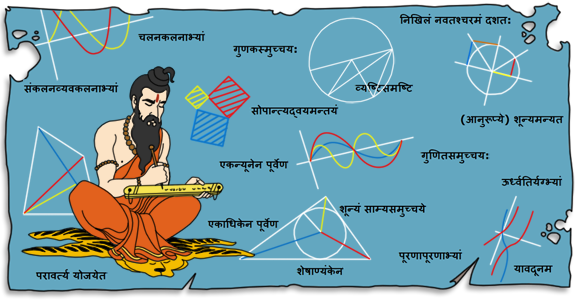 The two Ancient Indian mathematicians who are credited with developing this system are Aryabhata of Kusumapura (for developing the place-value notation in the 5th century AD) and Brahmagupta of Bhillamala (for introducing the concept and symbol of zero in the 6th century AD). This numeral system, including the concept of zero, spread into various countries due to commercial and military activities with Ancient India and was adopted, especially by the Arabs - who modified the Sanskrit-Devanagari texts of numerology and further spread them to the western world. Even today, the Arabs refer their subject of mathematics as Hindsa, and their numeral system as Rakam Al-Hind, or the Hindu numeral system. The Arabic translation of Brahmagupta's Brahmasputha Siddhanta was titled Sind Hind, and remained the primary reference for Arab mathematicians - for many centuries. It is, thus, not a coincidence that the numeral system that the world uses today, exhibits great similarities with many of the Sanskrit-Devanagari notations, which are still used in India.
(Source: Wikipedia - Numeral system, Aryabhata, Brahmagupta)


In Ancient India, Mathematics was referred as Ganitam, whereas 'algebraic rules' were referred as Bijaganitam (Bija means 'another', or 'second' and Ganitam means mathematics) - implying a set of rules, or Sūtras (rules), recognized as a parallel form of computation, in addition to the conventional operations. Reference to Bijaganitam is found in Aryabhata's treatise on Mathematics in 5th century AD (Āryabhaṭīya in 449 AD, when he was 23 years old), and again in Siddhanta-Shiromani by Bhaskaracharya in 12th century AD - which has a section on Bijaganitam.

India was subject to invasions from 13th century AD primarily by Arabs, who adapted the system of mathematics practiced in India and termed it Al-Jabr (reunion in Arabic) to mean the amalgamation of Indian mathematics into Arabic. During the same time, Christian kingdoms of Europe made several attempts to reclaim the birthplace of Jesus Christ from the then Mohammedan-Arab rulers. Although these 'Crusades' failed their military objectives, there were massive exchanges of ideas. During these exchanges, Al-Jabr was renamed as Algebra, adopted by the western world, and developed further during Renaissance in Europe. Incidentally, algebra is known in India as Bijganit - introduced to Indians by the British Empire!

It is, thus, not a coincidence that Vedic Mathematical Sūtras can be applied on the existing numeral system. On the contrary, they are an obvious set of rules (or formulae) that was developed to supplement calculations based on the commonly used numeral system, which the Vedic Civilization founded - and not mere tricks for faster arithmetic calculations.

It should be noted that most of the Vedic Civilization was based on oral traditions, and were only documented in scriptures much later - after the Sanskrit-Devanagari language was developed. The enormity and depth that the studies have been conducted, especially in astronomy and cosmology, in studying spirituality (nature) - is evident of a thorough understanding of arithmetic, algebra, geometry, trigonometry and many other branches of mathematics - which has been a source, either directly or indirectly, of many findings, inferences and theories. However, there is not much documented scripture or book on mathematics used in the Vedic Civilization, implying that mathematics was studied for its own stake - primarily to further the studies of other branches of science and nature. Nevertheless, references and traces of mathematics are found in the Vedas - dating it at early as 10th century BCE.


Even the concept of zero appears in Brahmasputha Siddhanta written by Brahmagupta in 628 AD to explain 'The Opening of the Universe', where he mentions not only zero, but negative numbers and algebraic rules for elementary arithmatic operations with negative numbers, and zero. This was a historic leap in the world of mathematics, as the inclusion of zero in mathematics opened up a new dimension of negative numerals and provided a standard for measurements.

Nevertheless, Brahmasputha Siddhanta is a book on astronomy, and not mathematics, where Brahmagupta uses the mathematical concepts to support his astronomical findings - making one wonder if the concept of zero was already in use, much before Brahmagupta documented it: (Source: Wikipedia - Brahmagupta, Pāṇini, Bakhshali Manuscript)

These observations help in understanding the depth of mathematical influence in Ancient India - not reflected in recorded history. These observations do not, in any way, discredit the Indian mathematical greatness of Aryabhata and Brahmagupta - especially because their contribution to the world of mathematics is far more than what is generally percieved.
For example, the 'Fibonacci Identity' was discovered by Brahmagupta, who generalized it to 'Brahmagupta Identity' and used it in his study (what is popularly known as Pell's Equation!). His 6th century AD Brahmasputha Siddhanta containing these works was translated into Arabic by Mohammad al-Fazari, which was in turn translated into Latin in 1126 AD - and finally, this identity appeared in Fibonacci's 'Book of Squares' in 1225 AD. Thankfully, 'Fibonacci Identity' is now renamed as 'Brahmagupta-Fibonacci Identity' - in acceptance to the original contributor.
And, Brahmagupta's Chakravala Vidhi to solve Pell's Equation (ironically, almost 1000 years before John Pell's time) is commonly attributed to another Indian mathematician, Bhaskara II, for his 12 century contribution to the subject (the first general method for solving the Pell's Equation by extending Brahmagupta's works) - again, almost 400 years before John Pell's time.
(Source: Wikipedia - Pell's Equation, Chakravala Method)


One of the most interesting observations in Vedic Mathematical studies is the Baudhāyana Shulbasūtra, which is part of the Baudhayana sūtras compiled in 8th century BCE: Incidentally, the Baudhāyana Shulbasūtra (shulba means rope, and sūtra means rule) is not a compilation of geometry, or mathematics, or even astronomy. It is only a compilation on vedic rituals, and explains geometry (with a rope, for layman's understanding) for construction of yajña bhūmikās - vedic altars on which the rituals are to be conducted - including fire offerings (yajña)!
And, the manner in which the geometric rules are explained serves as a indicator that these rules are already proven, and do not need to be proved - more like statements, or axioms - for reference and guidance. One can only wonder that geometry in Vedic Civilization was already in use much before 800 BCE! But, not much is known about the Vedic Civilization, and India has to remain content with the earliest recorded surviving evidence - which is the 800 BCE compilation, Baudhāyana Shulbasūtra.
(Source: Wikipedia - Baudhayana Sūtras, Shulba Sūtras, Pythagoras, Pythagorean theorem, Euclid, Pi, Shatapatha Brahmana, Madhava–Leibniz Series)


Furthermore, geometry in Ancient India was referred as Rekha-Ganitam and applied in the drafting of Mandalas, meant for architectural purposes. The Arab scholar Mohammed Ibn Jubair al Battani studied the Indian use of ratios and fractions from Rekha-Ganitam and spread them to other scholars - notable amongst them is Al Khwarazmi - the chief exponent for an Indo-Arab amalgam in mathematics. When it was adopted by the western world, the works of Al Khwarazmi was renamed 'Algorismi', which is the root of a modern term 'Algorithm', used in computer science. Even the terms "Trigonometry" and "Geometry" are derived from Sanskrit words 'Trikonmiti' and 'Gamitri'.

To shorten the long story, Vedic Mathematics is a unique contribution of Ancient India to the world, particularly to the world mathematics - often termed as 'tricks' or 'mental maths' by the western world - which, over thousands of years, remains the oldest and the fastest method for calculations. We, at Upavidhi, believe that one can use the Sūtras of Vedic Mathematics now, or wait for a hundred odd years for today's mathematicians to 'rediscover' them:
Enjoy Vedic Mathematics for Fastest Mental Calculations » or simply, Get Introduced to the Tricks »