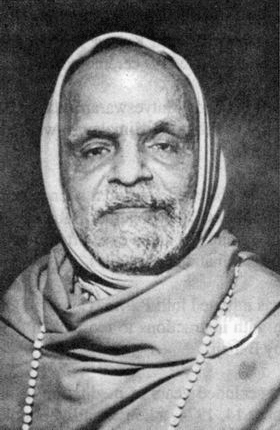 Vedic Mathematics, or simply Vedic Maths, is a given name - for a system of Indian Mathematics discovered by Sri Bharati Krishna Tirthaji (1884-1960), as part of his research of scriptures (dating Vedic times) that contained 'Ganita Sūtra', and were earlier rejected. According to his (years of) research, he deciphered these 'Ganita Sūtra' and concluded that (practical) mathematics in ancient times was based on 16 Sūtras, or word-formulae.

His research is believed to be related with Atharvaveda - often called the 'Veda of magical formulas', and the Upaveda: Sthāpathyaveda - that comprises all kinds of architectural and structural human endeavours.

It is obvious that the entire 'ancient traditions of mathematics' came to light because of his works, and all related works on Vedic Mathematics revolve around his initial works - 16 volumes, each on every Sūtra - which were irretrievably lost. He served the Govardhan Peeth, Puri Jagannath - as Jagadguru Sankaracharya (1884-1960) - and propagated Vedism and Vedic Mathematics all over the world through innumerous lectures and demonstrations. It was only during his last days, and the enterprise of some disciples who took down notes, that the book of 'Vedic Mathematics' was published in 1965 - almost 5 years after his demise.


The 16 Sūtras, that the world of Vedic Mathematics revolve around are based on his 'amplifications' of 'vedic codes and symbols', documented in the afore-mentioned book on Vedic Maths. These 'tricks' of Vedic Maths are used and taught by mathematicians and scientists all over the world, and has also found its application in Computer Science and Artificial Intelligence.

These 16 Sūtras, and as many Upasūtras, of Vedic Mathematics is the single-point source of the innumerous 'Mental Maths' books, tutorials and videos, and it is abundantly used in the tricks and short-cuts demonstrated for providing students an edge in competitive examinations - around the world.

Furthermore, according to his research, there has been considerable literature on Vedic Mathematics in the Veda Shakhas. It is evident from the fact that around the time of Patanjali (25 centuries ago) 1131 Veda Shakhas have been documented - out of which only about 10 are surviving. However, Vedic Mathematics is a subject that is currently being researched further, and it is only in its initial stages of research.


Upavidhi(.com) is a web endevour dedicated to the mathematical aspect of Vedic Mathematics - to help more and more people, around the world, to excercise Vedic Maths - for the greater good of mathematics, and for no other vested reason.

In view of the above, visitors of this website may please note that throughout this website (except for our 'Home Page', for obvious reasons) the term 'Vedic Mathematics' is used to describe this mathematical system, including observations by Swami Bharati Krishna Tirtha - and not necessarily Ganitam used in the Vedic Period, or Ancient India.

For us, the principles of Vedic Maths work! It is all that matters. Period.